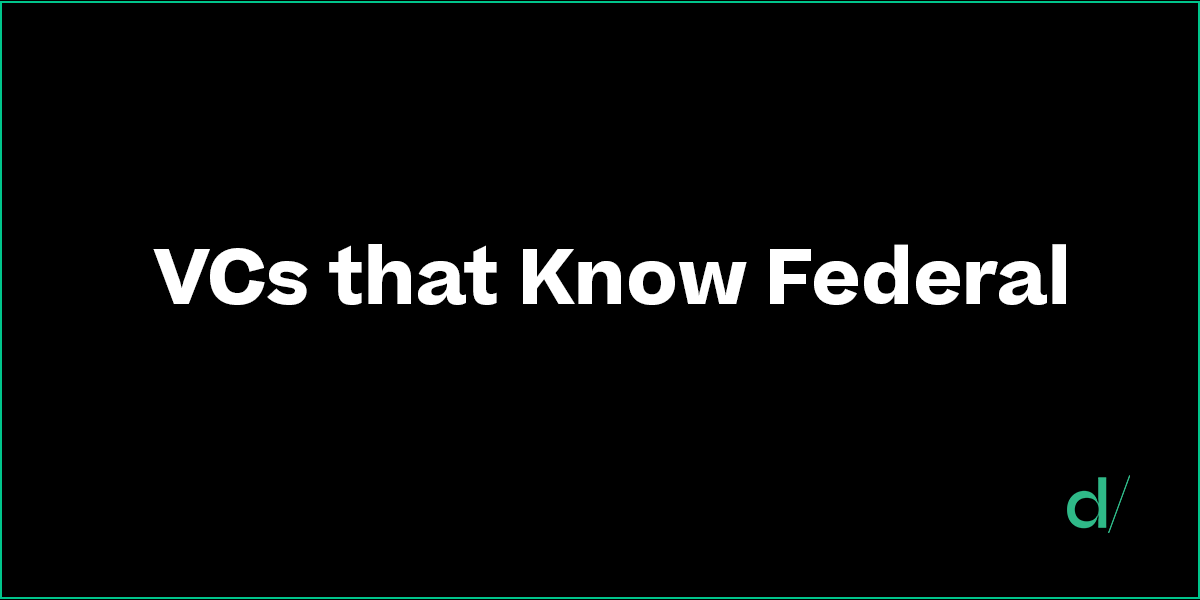 Many VCs are wary of the federal market, and for good reason: sales cycles are traditionally long, procurement processes are opaque, and requirements are often ill-defined.

8VC is a venture capital fund based in Austin, TX. Founded in 2015, the firm makes industry-transforming investments in financial services, health IT, logistics and transportation, and smart enterprise companies.

The investment team includes Joe Lonsdale, former founder of Palantir and OpenGov. 8VC’s portfolio ranges from consumer companies like Hims to defense startup Anduril. A handful of 8VC companies have successfully broken into the federal market.

In 2016, 8VC invested in Joby Aviation, developer of a vertical takeoff and landing (VTOL) aircraft designed for personal mobility. Joby reached an agreement to go public through a reverse merger with a SPAC in February 2021 at a pre-money valuation of $5.91B.

Joby entered into partnerships with Uber and Toyota to provide personal mobility solutions, and also have promising contracts in place with US federal agencies. Joby has worked with NASA since 2012, and received the first-ever airworthiness certificate for a VTOL aircraft from the U.S. Air Force as part of its Agility Prime program in 2020.

8VC invested in Epirus in 2020, which uses directed energy to counter unmanned aircraft systems. Epirus’ applications have both commercial applications in event management and security, airport safety, and critical infrastructure protection, as well as defense applications. In December 2020, Epirus was awarded a Phase I SBIR contract with the U.S. Air Force and also entered into a strategic supplier agreement with Northrop Grumman in 2020.

Lux Capital invests in emerging science and technology ventures across a wide range of industries, from 3D printing to machine learning to robotics, Internet of Things (IoT), augmented and virtual reality (AR/VR), and more.

Founded in 2000, Lux Capital has made numerous investments in space tech and UAS companies with both commercial and federal applications. The investment team includes Bilal Zuberi, who has led many of Lux Capital’s investments in the defense and public safety space.

Evolv is a a personal security company with touchless screening, entered into an agreement to go public via a SPAC. Evolv counts major universities, stadiums, national landmarks, and airports as customers to provide employee, student, and visitor screening. In 2013, Lux Capital invested in Evolv’s 11.8M Series A.

Evolv has tested its product with the Department of Homeland Security (DHS) and the Department of Defense (DOD), and its applications in defense and intelligence in addition to civilian agencies are clear. Evolv’s advisors include former DHS, DOD, Federal Bureau of Investigation (FBI), and Office of the Director of National Intelligence (ODNI) leaders like General Tony Thomas, Juliette Kayyem, John Pistole, and Dan Coats.

Founded in 2011, Social Capital’s mission is to advance humanity by solving the world’s hardest problems. Social Capital has produced a public list of the world’s hardest problems that guide its investments. Investing in healthcare, enterprise technology, frontier technologies, and education, Social Capital’s portfolio includes a variety of companies with commercial and federal applications. A key investor on their team is Jay Zaveri, who has a track record investing in aerospace and defense technology.

Swarm Technologies is a global communications satellite communications network designed to make IoT available on a global scale with low-cost, two-way data transfer. Social Capital led $2.5M in seed funding for the company in 2016, which then received $1.79M in grant funding from the U.S. Department of Defense, Air Force, and National Science Foundation in 2019.

Applications include agriculture, maritime, utilities and energy, and fleet management solutions. In January 2021, Swarm launched 36 additional satellites to bring its total number of commercial satellites in orbit to 72. Swarm plans to grow its network of nano-satellites to over 150 by the end of 2021.

In 2016, Saildrone raised $14 million in a Series A round led by Social Capital.Saildrone counts National Oceanic and Atmospheric Administration (NOAA) as a key partner and in 2020 completed its first Arctic mapping mission on behalf of NOAA’s National Ocean Service. Saildrone has also landed contracts with the U.S. Coast Guard worth approximately $1.7M.

Here at Dcode, we focus on tech that has proven traction in the commercial and federal market to diversify a company’s customer base. Startups frequently ask us how they can best make the case to potential investors about the value of their federal revenue. While the government market isn’t easy, VCs should rethink the ROI for their portfolio companies. The federal market is often the right move. The more VCs that realize it — the better.

Learn more about how Dcode Capital supports tech companies scaling in the federal market at dcodecapital.com →